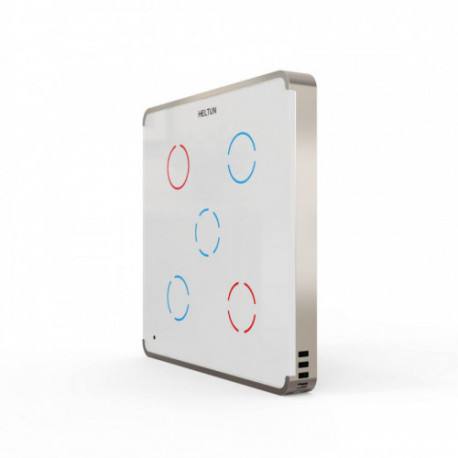 When considering your convenience at home, what is most important? Is it being able to turn ON or OFF lights without running through different rooms? Or be able to lock the door, close the blinds, and dim the lights with a single touch? Or maybe something else? Whatever the need, HELTUN has got you covered.

Whether one switch or five, the HELTUN Touch Panel Switch is still impossibly thin and impossibly smart. 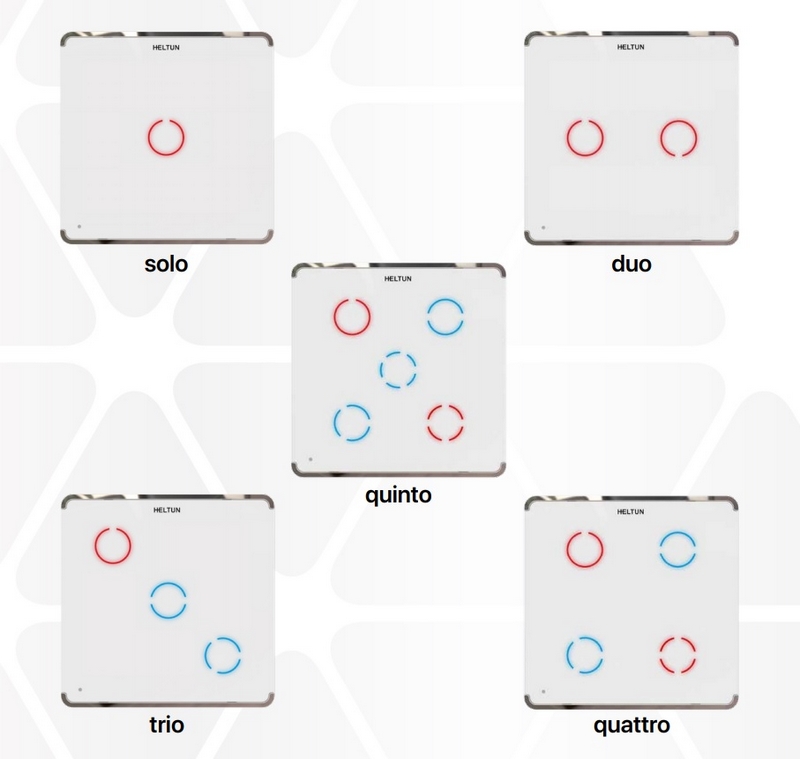 The Touch Panel Switch is available in 30 combinations to integrate seamlessly with your interior design. Five frames (silver, chrome, gloss black, matte black, & white), and six glass colours (white, black, yellow, green, red and blue) let you match any environment, style, or taste. Designed to be powerful, efficient and stylish, at 9 mm thick the Touch Panel Switch is ‘impossibly thin’ and good-looking on your wall.

HELTUN Touch Panel Switches include sensors to monitor temperature, humidity, and ambient light which can be accessed by a Z-Wave controller and used to trigger home automation scenes. The frequency (reporting time) of data updates from sensors can be individually adjusted to meet the needs of your smart home system. 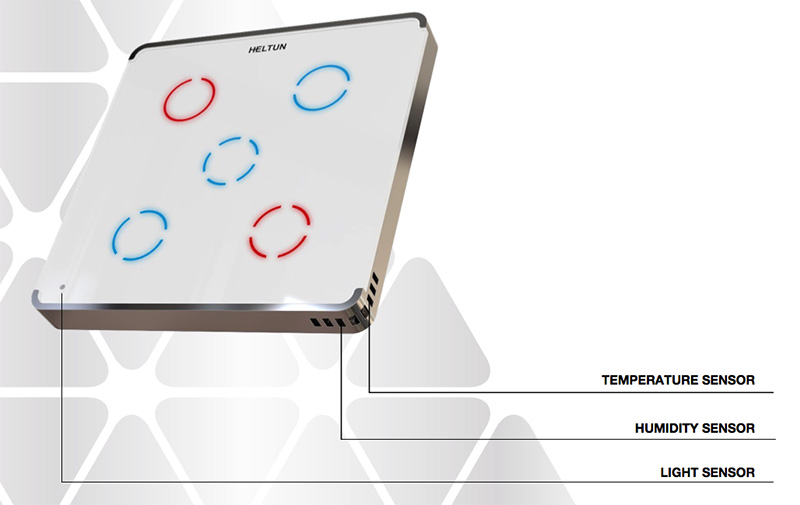 The main power input can be either 85-265VAC or 12-48VDC. There are five relay outputs each with a maximum 5 Amp load.

There are also two independent inputs for relay channels which allow control of systems with different power sources, or to use outputs as dry contacts: e.g. to switch On/Off 220VAC lights and control motorized valves with 24VDC power.

Input 1 with the required power source is for relay channels 1, 2 and 3, which can carry a maximum 15 Amp load.

Input 2 with the required power source is for relay channels 4 and 5, which can carry a maximum 10 Amp load.

Know how much energy you use

The HELTUN built-in Power Consumption System precisely monitors how much energy you used during any particular day, week, or month. Do your current light switches do that?

Just specify the consumption of the load in watts for each relay channel and the Touch Panel Switch logic will calculate total consumption relative to the time since the output was in the ‘ON’ state.

We have also designed the circuitry so it draws almost zero watts to power itself when in standby mode. This saves you energy and money especially if your home is equipped with many HELTUN products.

The panel has five touch-sensitive control ‘buttons’ that react to even the lightest touch. Each button has a two-colour backlight, red or blue, to indicate its state. 15 different brightness levels can be manually configured for each button backlight by setting the value in the parameter settings, or in automatic mode.

In auto mode, an internal ambient light sensor adjusts button backlight brightness automatically to room lighting conditions. This makes each control state easy to see even on bright sunny days, plus it will prevent your eyes from being overpowered at night.

1) Each of the five buttons can control any relay output. Also, the output of 1-5 relays can be controlled by each button.

2) There are five modes that can be configured for each button:

3) Relay outputs can be controlled by a timer. For example, pressing a button can switch a relay ON, and after a specified time it can automatically be switched OFF (or vice-versa: OFF, then ON). This function can be used to open or close garage doors, gates, blinds, curtains, loсks, etc., and then return them to their previous state with no additional input.

4) Each touch-sensitive ‘button’, its backlight, and associated relay output, can be independently managed by a Z-Wave controller or associated device - and can run scenes with the backlight indicating scene state or device status. 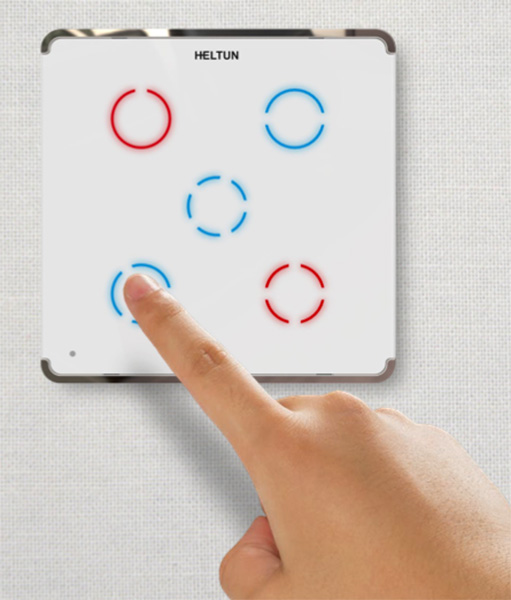 The HELTUN Touch Panel Switch does a lot more than just control house lights. You can use it to control motorized blinds, curtains, garage doors, driveway gates, and electric locks. You have full control over programming different buttons for specific functions.

For example, you can designate the top left button to raise the living room blinds, and the bottom left button to lower them. In this mode, if the blinds are rising and you then touch the down button, the system will automatically cancel the UP command and initiate a DOWN command, or vice-versa.

The system also calculates the position of the blinds when fully opened or closed and automatically stops the motor when it reaches the UP or DOWN limit. If you have installed a door sensor - as on a garage door - you can associate that sensor with the button backlight to indicate the actual UP or DOWN state of the door.

Using the internal timekeeping of the HELTUN Touch Panel Switch, you can create schedules for some devices. For example:

Scenarios can also be created that allows connected devices to be triggered by a sensor. For example:

The possibilities for adding convenience and comfort are endless and limited only by the creativity of the owner or installer of the HELTUN Touch Panel Switch.

Control up to 100 Z-Wave devices

The HELTUN Touch Panel Switch quinto has 20 association groups, with 5 controlled devices for each group. “Basic Set Devices” (On/Off), or “Multilevel Set Devices” (Variable Position), can be associated to each group. This enables it to operate within the most demanding smart home systems.

It can also be configured to provide control and feedback in powerful ways. For example, you can associate a Z-Wave dimmer switch to two Touch Panel buttons allowing you to turn a light fixture.

You can even associate the button backlights with the Z-Wave dimmer switch and dim them to the same level as the lights. The HELTUN Touch Panel Switch is almost infinitely configurable while remaining intuitive and easy to use.

HELTUN Touch Panel Switches can be easily installed into any standard electrical junction box (square or round). Installation must only be performed by someone trained in handling high voltage electrical systems.

This Touch Panel Switch is compatible with all Z-Wave certified controllers and devices that properly implement Z-Wave Touch Panel Switch classes. Using a Z-Wave controller, you can manage all switch functions via a mobile app including temperature & mode changes, viewing energy consumption charts, and much more.

HELTUN devices are compatible with all Z-Wave frequencies for different countries (Europe, Russia, Israel, Australia, USA, India, Hong Kong, China, Japan, and Korea). The correct frequency can be selected in the device menu.

HELTUN periodically releases new device firmware with added features which can be remotely updated via an encrypted OTA (Over-The-Air) process.